M is for Macron's Marianne

I did not realize for a long time that each French president gets to choose a new design for the definitive Marianne stamps.

President Macron chose a design by street artist Yseult Digan, aka YZ, which he described as depicting Marianne as a politically engaged young woman. Link to article at art news.

I think the blue Europe rate below is the first of the new design I have received, and it comes from Heleen who was on vacation in France. Thanks for the unexpected mail! 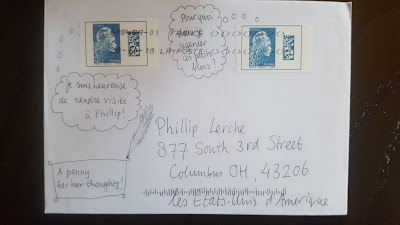 'Penny for her thoughts' made me think of the fact that the first stamps issued in Britain cost 1 penny :)

To see other entries for marvelous Ms, explore the links at Sunday Stamps.
Posted by FinnBadger at 8:35 AM 11 comments:

Email ThisBlogThis!Share to TwitterShare to FacebookShare to Pinterest
Labels: A to Z challenge, Heleen, sunday stamps

L is for Levitation

USPS issued a set of five stamps titled Art of Magic this year. Each one has a theme, today's being levitation. I really enjoy the clean graphic design of these stamps.

Used on Halloween mail to Eva. From her blog: 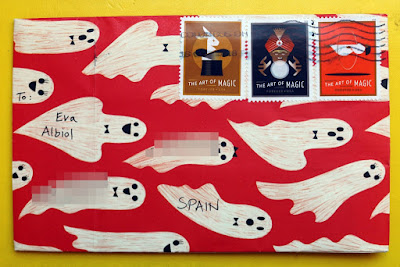 For more lovely L-themed posts, explore the links at Sunday Stampshttps://seeitonapostcard.blogspot.com.
Posted by FinnBadger at 9:02 AM 13 comments: