I don't think it gets much more urban than having a railway for mail that allowed for rapid movement under the city of London. This is a Royal Mail Post & Go postal label dispensed from a machine (in some countries they may be called stickers).

The post office railway was driverless and ran from 1927 to 2003. It is now a museum. It ran between Paddington and Whitechapel, was 6.5 miles (10.5 km) long and had eight stations. Each station was located underneath a sorting office. Over time, as sorting offices were relocated, only 3 stations remained in use. Finally, due to the fact that it was more expensive to run trains than to truck mail around London (although the trains were more environmentally friendly), the Mail Rail closed.

You can read more about this unique piece of postal history at its wikipedia page.

For links to more blogposts about stamps with an urban theme, head over to Sunday Stamps.

Eva recently sent two stamps, both issued in 2006, that celebrate newspapers that have been in print for at least a century.

They were both issued in 2006. First, a stamp for the newspaper Levante, based in the region of Valencia and first published in 1872. 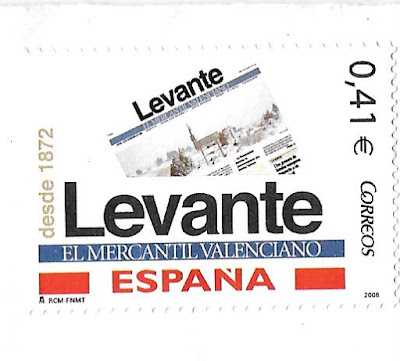 And second, one for Diario de Pontevedro, which first went to the presses in 1889. 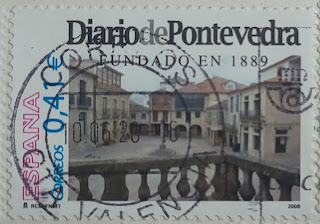 For more black and white stamps, explore the links at Sunday Stamps.

There are three flags on these 1998 Italian stamps: Italy, Sardinia (also know as 'The four moors flag'), and the European Union. 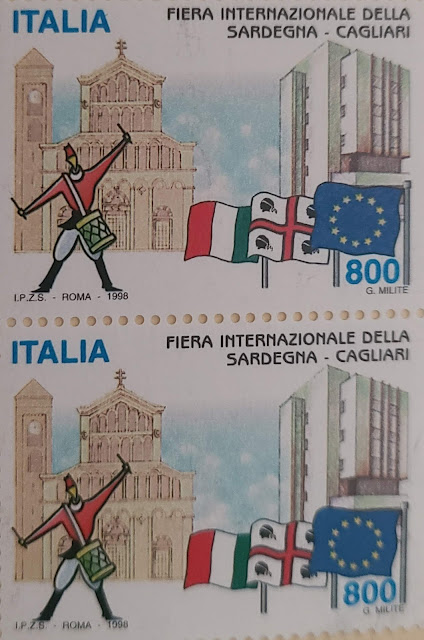 The stamp celebrates the International Fair of Sardinia, held in Cagliari every year since 1948 in its current form. I don't know if Italian stamps valued in lira are still valid as postage (there was a 2 euro stamp on the card also).

And in the US flag stamps are ubiquitous. Here are two I received in the mail during the past two weeks. 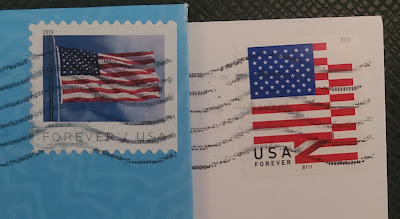 On the left is 'U.S. Flag' designed from a photograph, issued in 2019, and on the right is a graphically designed 'U.S. Flag' issued in 2018. I hadn't noticed that they have the same name - in the past I remember the flag stamps having their own distinct names. The 2018 stamp takes its cue from another stamp issued in 2018 to commemorate the centenary of the Flag Act of 1818. The Flag Act formalized the design if the US flag - thirteen horizontal stripes and a star for each state - as well as the fact that changes to the flag after admission of a new state would always occur on Independence Day, July 4th. 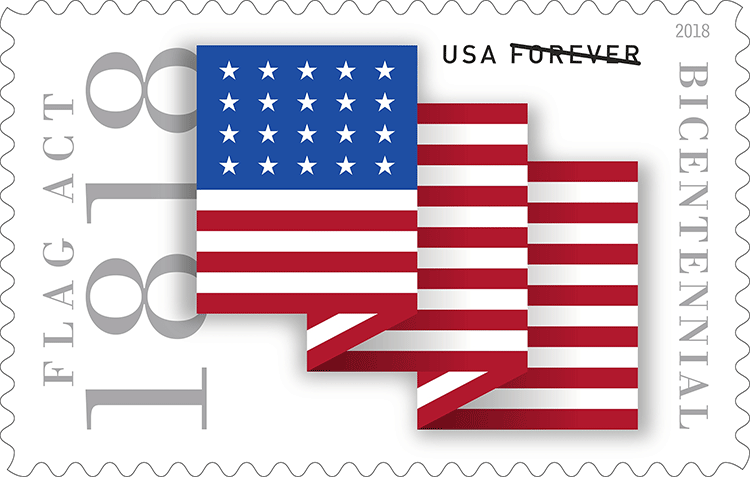 Bonus:
Inspired by CJ's comment, here's more on the flag stamps issued by USPS over the last 10 years, and whether I am a fan or not.
2020 "U.S. Flag stamped envelope". Graphic design.
No U.S Flag stamp issued (so far). There is a flag on the prestamped envelope - I am not a fan of this design (it reminds me of that roasting pan in the oven). The stars around the edge are a nice touch. 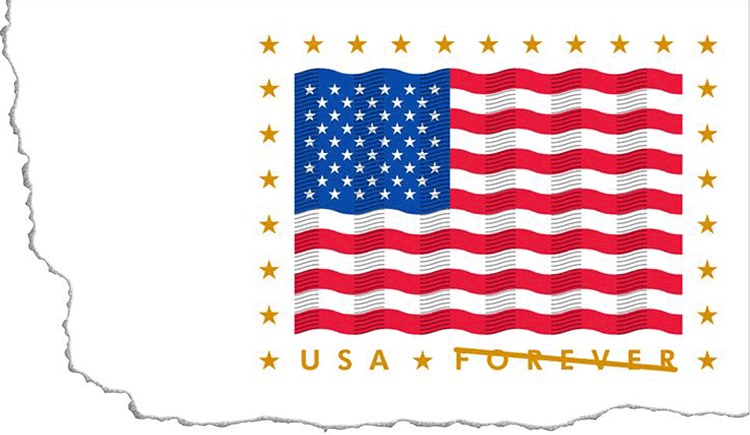 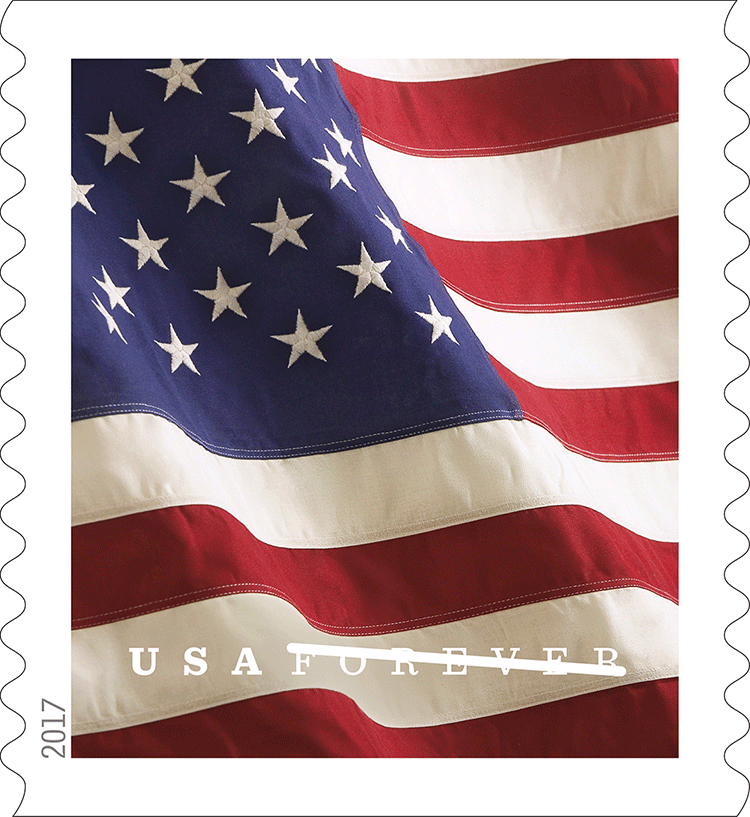 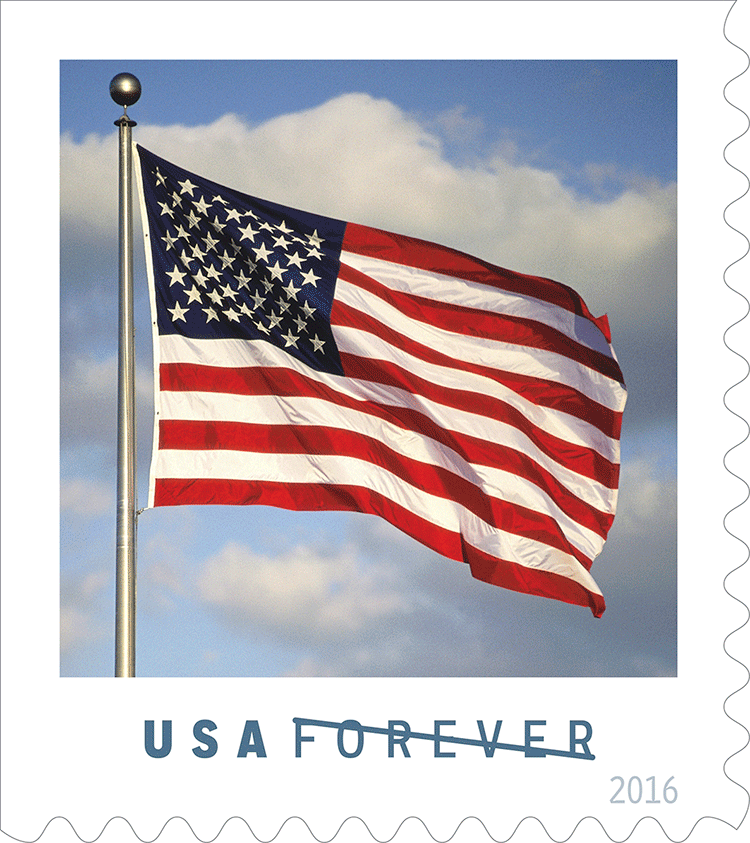 2015 'Stars & Stripes Presort Coil'. Graphic design.
There was no first class flag stamp issued, however there was a design of 3 stamps (that look best when seen together) at the presorted rate. I love this design, and would have enjoyed this at a first class rate.

2014 "Star-spangled Banner". Design created graphically from a photo.
This was different take on the more classic approach to flag stamps. I liked this one, and used it on mail. I remember some people not liking it because the flag was a little blurry. I believe the idea was to represent the flag in motion. 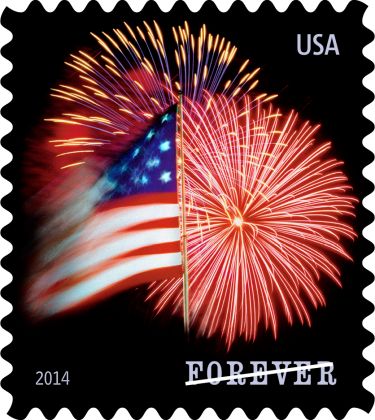 2014 "Red, white and blue". Graphic design.
This is my favorite of the graphic designs of the past 10 years. I remember reading some comments from people who despised them as too abstract. I believe it was only issued as a coil set. I bought a strip of them back when the post office sold strips of 20 stamps - not sure if the philatelic service still does that, lately I've been seeing strips of 500 being offered (coils usually come in 1, 5 or 10 thousand).

2013 "Flag for all seasons". Art design (possibly made/inspired by photos)
This was a nice take on a set of flag stamps, although hard to depict a difference from spring to summer though. 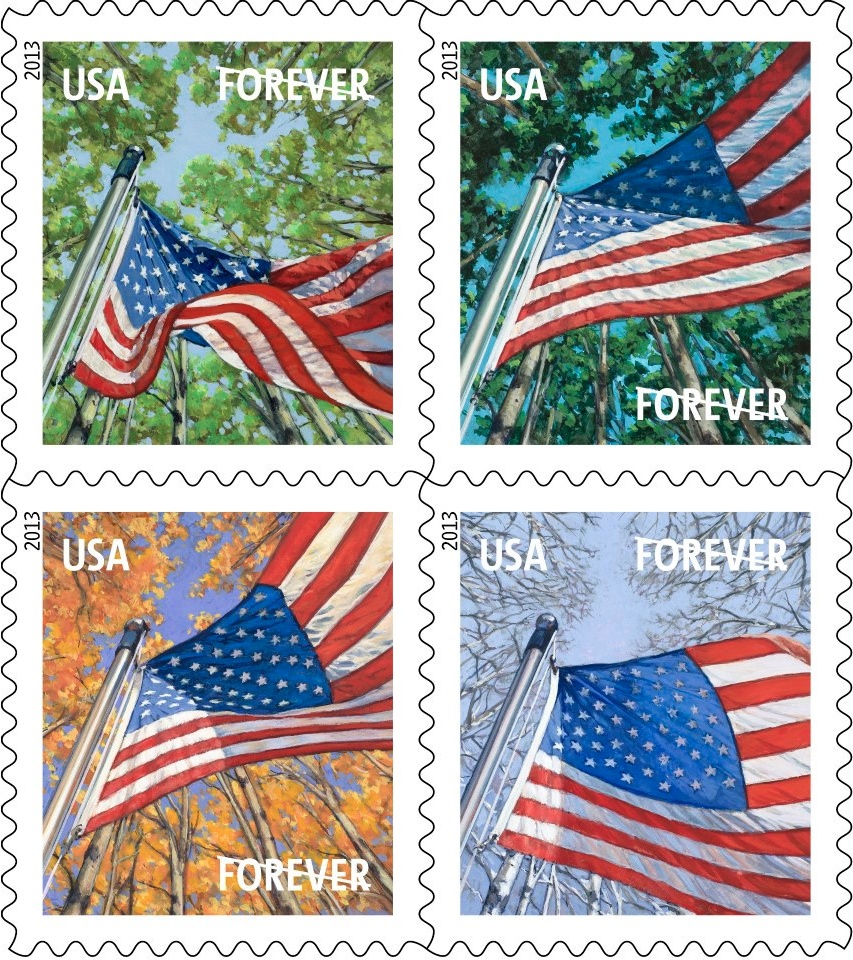 2012 "Four flags". Art design.
I believe this was a very popular set. I don't have a strong opinion on it. 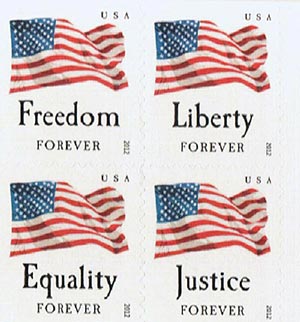 2011 "Lady Liberty and Flag" Photo design.
I liked these stamps, although the Lady Liberty turned out to be a photo of an imitation in Las Vegas. Note that USPS since dropped the 'first-class' from their first class stamps, and just use the 'forever' term. 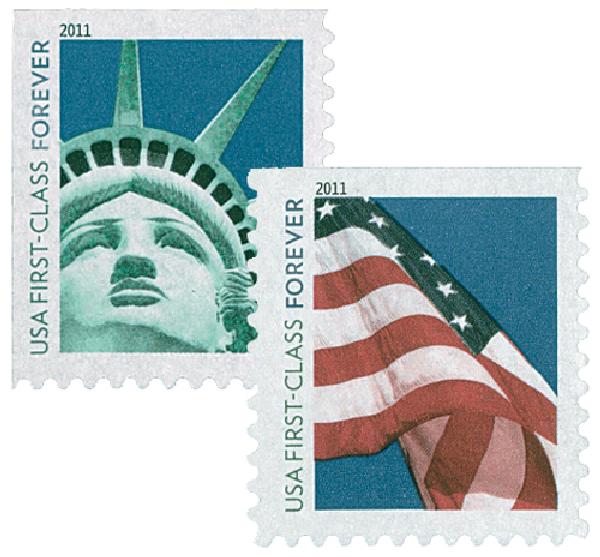 So it looks like giving (slightly) more descriptive names to the flag stamps stopped in 2016.

Explore more links to flags on postage at Sunday Stamps.

Today's theme is big animals. I chose animals that are (mostly) larger than a human.

A giraffe and a giant panda on these US stamps issued in 1992.

And western lowland gorillas, a critically endangered species, on this stamp from Australia issued in 2016. 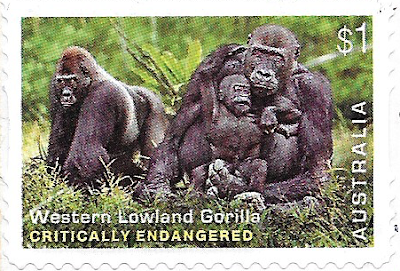 For more big animals on stamps, explore the links at Sunday Stamps.

Today's Sunday Stamps theme is southern hemisphere. While there are many countries in the southern half of the world, the land down under often springs to mind.

I received a postcrossing card from Australia with 3 nice stamps and a nice postmark, asking people to keep letter carriers safe by securing their dogs. 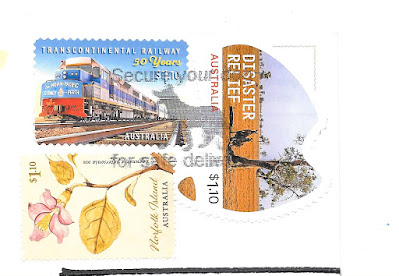 Terra Australis, southern land, is a term European explorers used to describe what is now the country of Australia. Depicted on this shaped stamp issued for disaster relief earlier this year. The stamp is part of a set of 5, issued as a sheet with AUS$2 of the AUS$5.50 going to a relief fund. 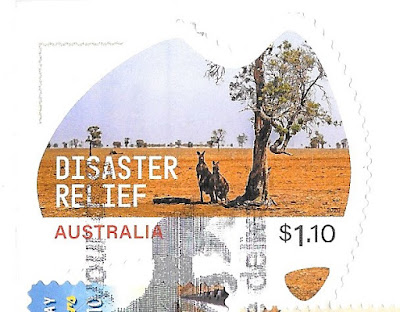 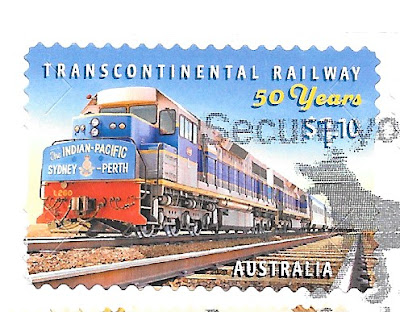 And finally a stamp issued by Norfolk Island that celebrates early botanical art. It was issued as a mini-sheet earlier this year. 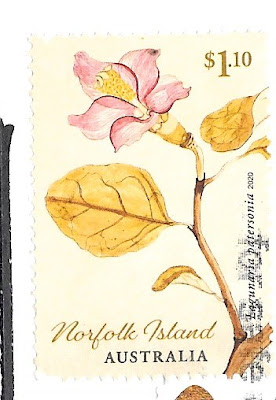 Explore more stamps of the southern hemisphere (and more from Australia) - head over to check out the links at Sunday Stamps. 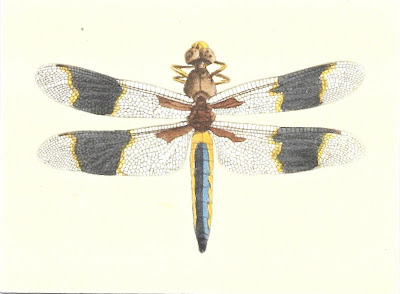 The theme for Sunday Stamps today is yellow. 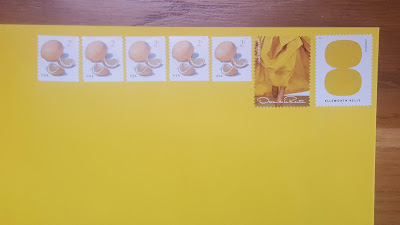 From left to right:

Yellow white (1961) one of Ellsworth Kelly's abstract paintings on a stamp issued in 2019.

For more yellow stamps visit the links at Sunday Stamps.

I was about to send out some envelopes using the coral reef postcard stamps when Fafa sent me a closely matching postcard. 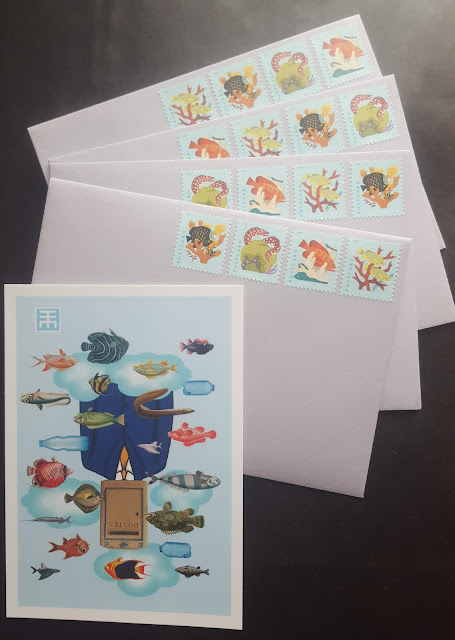 In a senior moment, I scanned it upside down, so here is the postcard the right way up. 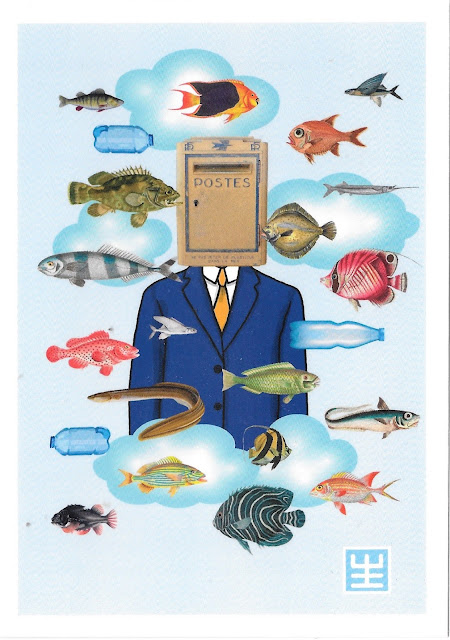 Thanks for this great postal coincidence, Fafa.
Posted by FinnBadger at 12:00 AM 4 comments: