Today's Sunday Stamps theme is stamps with words or numbers, no pictures.


USPS first issued a stamp celebrating the Muslim holidays of Eid al-Fitr and Eid al-Adha in 2001. This gold-on-blue design was reissued in 2002 (37c), 2006 (39c), 2007 (41c), 2008 (42c) and 2009 (44c).
I think the stamp is an attractive design. Interestingly, it has been the subject of much misinformation and politicization during Obama's presidency (even though it was first issued in the first year of the GW Bush presidency, and even though the president has nothing to do with stamp production whatsoever), as you can read here at factcheck.org. 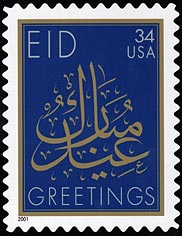 Even more entertaining is the fact that somehow the Kaleidoscope Flowers stamps (one of my favorite designs, which were only available online in strips of ten cut from the giant coils used for automated stamping of junk mail) have been associated with being issued 'to celebrate Muslim holidays', even though this is not the case, and had a viral email/online campaign against buying them.

A slightly different design was issued as a Forever stamp with a red background, and no white border, in 2011.

The current version, issued in 2013, has a green background.